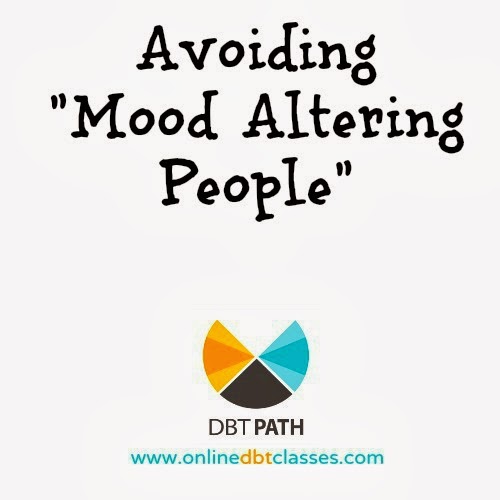 In our online Emotion Regulation 1 class today, one of our students shared that this past weekend she attended a family dinner where a relative made insensitive remarks about minority groups, and this really offended her.  She noticed her anger rising to 95 on a scale of 0-100.  After the incident, she filled out an Emotion Regulation 1A worksheet and discussed it in group today.

While checking in about the homework she completed, she shared that days later she is still feeling some anger toward the person.  Part of this is because she openly and respectfully expressed her dismay at his behavior, and rather than take responsibility for the comments that he made and offering a sincere apology, he gave her a business-like email response accepting no responsibility.

Unable to change her relative's ways and his response, she needed to figure out how to take care of herself.

Here are the ways that she is using DBT skills and her Wise Mind to cope as effectively as possible:


In doing these steps, the student helped to reduce her anger and kept herself safe and distant from potentially sabotaging behaviors.  She found ways to manage and tolerate the distress that arose from the upsetting interactions with her family member.

DBT Path appreciates your comment. Please note that we cannot provide therapy or crisis intervention services on this blog. If you are feeling unsafe, please seek psychiatric or medical assistance at once. Thank you for visiting.