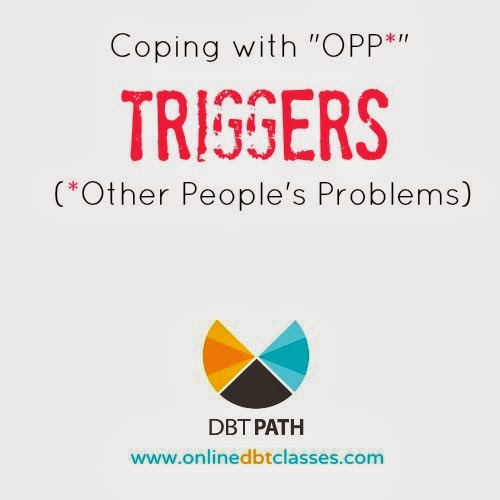 Today in one of our online DBT groups, two students bravely shared how they skillfully and effectively coped with being triggered by "OPP": Other People's Problems. We cannot live in a protective bubble all of the time. There will be times, including those that are very unexpected, where we may overhear or see something we find terribly upsetting, leaving us feeling emotionally distressed and dysregulated.

There are times when we become triggered by things that other people say or the way that they behave.  In our first student's example, she was triggered by another student's (unknowing) pushing of boundaries by sharing explicit information regarding self-harm.

In our second student's example, she was triggered to find out that some dynamics of her personality triggered another student, which then triggered her.  Let's look at each of these.

In our first example, our student was attending class when a classmate, new to DBT Path and DBT in general, began sharing information that she (and even our facilitators) found upsetting and triggering.  As quickly as possible, the student was gently redirected, and a Trigger Warning (TW) was placed on the screen for students so that students who were feeling sensitive to the topic could take a break away from the screen and take off their headsets.  Of course, unfortunately, they may have already been exposed to the triggering emotion and now had to choose how to cope.

This particular student took care of herself in the following ways:


In our second student's example, she became aware that another group member disliked her and felt the need to leave the private Facebook group/social aspect of DBT Path.  Initially, she felt very sad, hurt, and distraught.  Through a DBT Chain Analysis worksheet, which she brought to class to discuss, she was able to deeply process the events that led to what she described as a "breakdown" that she further described as a crying spell, during which she continuously judged herself and spoke to herself harshly, saying things like, "No one likes me," "This happens everywhere I go -- what's wrong with me?!"  She herself had been triggered to remember elementary school, where she remembers not having friends and being picked upon.  She was in a very emotionally vulnerable place at this point.

This particular student is a sensitive, very caring, empathetic, encouraging individual who is proactive and outgoing in group activities and is often a leader who initiates conversations and cheerleads others.  Another student admitted to feeling threatened by this student's personality.  When our student in this example learned of this, she initially thought she had done something wrong and needed to change the way she was approaching things in class to accommodate the upset student.

This student took care of herself in the following ways:

How do you cope when triggered by other's actions or behaviors?   How might you approach being triggered differently in the future?

If you're interested in learning more about using DBT skills to cope effectively like these two students, check out our online DBT Distress Tolerance course.

DBT Path appreciates your comment. Please note that we cannot provide therapy or crisis intervention services on this blog. If you are feeling unsafe, please seek psychiatric or medical assistance at once. Thank you for visiting.